Menu
Menu
Back to all News & Media

Titomic will use its Titomic Kinetic Fusion technology to mitigate ionizing radiation to prolong the satellite’s lifespan through a cold spray additive manufacturing and coating process which allows deposition and fusion of dissimilar metals.

The Alpha satellites will form a constellation that will backhaul customer data from remote areas which are not serviced by terrestrial communications. The applications for the Fleet Space technology include the backhauling of geophysical survey data for mining exploration, enabling rapid 3D-modelling of vast terrain.

The successful application of Titomic Kinetic Fusion for radiation shielding was accelerated by the Australian Government’s Modern Manufacturing Initiative grant. Under the grant, Titomic’s radiation shielding was tested and validated by the Australian Nuclear Science and Technology Organisation (ANSTO), after having conducted extensive simulation and physical testing at its Lucas Heights facility. The ongoing Modern Manufacturing Initiative grant activities by Titomic also includes its collaboration with Boeing to create parts with ‘green’ titanium.

Fleet Space CEO and co-founder, Flavia Tata Nardini, said: “At Fleet, our vision is to provide connectivity everywhere on Earth and beyond. This requires an increasingly innovative approach to delivering satellite technology at scale and in a manner that is economically viable. Additive manufacturing is well-suited to these requirements.

“Alpha represents a major step forward, as it will be the first time a satellite has been created entirely through 3D-printing. Additive manufacturing has the further advantage of allowing us to manufacture more components in-house, ensuring supply chain stability and offering greater flexibility in our engineering approach.”

Dr Rob Acres, Commercial Technical Consultant to ANSTO said: “ANSTO’s involvement in this project ensured Titomic was able to turnaround design quickly, and deliver new capabilities to the sector through ANSTO’s nuclear science and technology expertise.”
To provide radiation shielding, the Titomic Kinetic Fusion technology will fuse thin layers of material to produce customised, multi-material radiation shielding in a range of areal densities that are tailored to Alpha’s specific mission. The technology offers a cost-effective solution for shielding to protect against harsh ionizing radiation in low-Earth orbit.

Titomic’s head of engineering, Max Osborne, said: “Our additive manufactured multi-layer shielding is a simple and accessible solution to increase uptime and extend the useful life for a range of platforms.
“For example, in low-Earth orbit, a small amount of shielding provides a cost and weight-effective insurance policy for enhanced reliability and additional mission life, and for higher orbits, further shielding can even reduce a dependence on expensive, radiation-hardened
components.” Titomic estimates that the radiation mitigating coating will prolong the lifespan of the satellite significantly, allowing it to remain operational for several years beyond previous iterations.

“With an ever-increasing number of participants and commercialisation of space, increasing operational life is one aspect of managing congestion. Extending the operational lifetime reduces the number of replacement platforms, their associated launch costs, and the need to track and de-orbit as many decommissioned platforms. “The successful launch and operation of the satellite will pave the way toward greater inclusion of Fleet Space and Titomic within the international space industry.”

Fleet Space Technologies’ Alpha satellites are expected to be launched into low-Earth orbit by SpaceX in 2023. 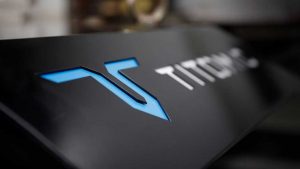 Titomic Limited (ASX: TTT) (“Titomic” or “the Company”), has signed a comprehensive Joint Venture (“JV”) agreement to establish the world’s

Learn what other industry leaders have achieved with our TKF Additive Manufacturing System.

Discover our technology
See our approach

Get the latest from Titomic